Residents on the former coal board estate of Wordsworth Drive and Sugar Hill Close, near Rothwell sports centre in Oulton are sick with worry as Pemberstone (their private landlord) submitted its planning application to bulldoze the 70 hom 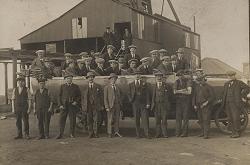 es on the estate and replace with 71 new private houses. Residents are happy there and many have lived there for decades including quite a few former miners, miners widows or grown up children of miners. There are a group of residents that have lived there for half a century when the estate was part of the mining community of the Rothwell district.

There are also a lot of residents who have lived on the estate for up to 15 or 20 years, who still be turfed out of their homes with only two months’ notice the same as those who have been there for a shorter times. Pemberstone says it will meet its legal responsibilities but as that gives no protection at all for most of the residents, it isn’t good enough.

Myself and my ward colleague Cllr David Nagle have been supporting residents in various ways since October see previous update. On our Labour councillors’ stall in Rothwell we collected signatures for the paper petition to ‘save our homes’ along with residents. This is being run in conjunction with the online petition which already has over 1300 signatures and you can sign at http://bit.ly/sohls26.  I also organised for a welfare solicitor to meet the group and he gave some useful advice to the tenants.  I also advised the residents of a phone in on 18 February on LBC radio with the Conservative housing secretary Sajid Javid where a resident got to speak with him and put the plight of the residents to him. He said he would receive their information and loo

k into it for them, but he hasn’t got back to the residents as promised.

I raised the issue in the council chamber at full council speaking up for the plight of the residents of the estate and used the opportunity to also call for more social housing. I also assisted the group in being able to take a deputation to full council on the same day to put forward their case to all councillors and senior council officers.

This is the sing

We have met with the group on a regular basis and offering ongoing support with all the issues as they develop. We have arranged for Leeds Housing Options to visit residents to offer the appropriate advice on each individual family’s housing situations.

When the issue came to light I managed to secure BBC coverage on its Look North television news programme to highlight the plight of the residents http://www.bbc.co.uk/news/uk-england-leeds-41650285.

We are lobbying the council to see to what extent it is possible that it could intervene to help the residents.

As a result, I’m pleased that Martin Farrington, the council’s director of city development will meet with Pemberstone, the owner of the homes, shortly so that the council has certainty about its intentions towards the tenants.

The planning department has told me that it will still accept comments on the planning application up until at least 16 February. If you want to help local families stop private investment company Pemberstone from bulldozing their homes to replace them with expensive executive homes please put your own comments in to object to the planning application. They are our neighbours and part of the Rothwell, Woodlesford and Oulton community and are relying on us all for support.

Here are some of the points you may consider including in your comments to planning application 17/06933/FU :